After more than a decade of research and development in cooperation with the Slovene company SkyLabs, we have successfully sent TRISAT, the first Slovene satellite entirely designed, produced and assembled in Slovenia, into space.

It has been almost half a century since people left their mark in space and in this time the human exploration of space has primarily focused on missions in low Earth orbit and remote scientific research. A high level of private funding, technological progress and the growing interest of the public sector have once again encouraged humans to look at the stars and a new space odyssey was about to begin. Fast progress in space technology has led to remarkable achievements of the human race in the direction of seizing new opportunities brought by the space environment. Space applications with remote observation increase the awareness and understanding of earth processes, with broadband communications, navigation and geospatial intelligence they raise the quality level of our life, enable physical exploration of space and open up new horizons as part of our deep view into space.

A single high-technology shift often triggers new periods of technological modernization followed by a series of innovations. With such technology shift based on a high level of miniaturisation we have managed to outline completely new concepts of satellite planning and created new key technologies on a global scale that spread around the entire world as technological seed. After more than a decade of research and development in cooperation with the Slovene company SkyLabs, we have successfully sent TRISAT, the first Slovene satellite entirely designed, produced and assembled in the Republic of Slovenia, into space. With this important milestone in the history of Slovene nation, we became one of the space nations. It is a remarkable achievement of Slovene science, engineering and economy, since we had the courage to take the path into space. For this purpose, we developed new breakthrough technologies, pushed the boundaries of miniaturisation on a global scale and set the ground for new opportunities. We have positioned Slovenia in line with other space nations and quickly proved that Slovenes as well are capable to co-design the future of space utilisation. Many new scientific and commercial space missions that reach into the dimensions of satellites’ constellations are driven by Slovene technology.

is the result of cooperation . . .

We have planted the Slovene seed of space technological progress not only in space but also in our region in form of the Slovene space industry. Over a decade ago, when we were taking up a new research and development direction we were aware of our responsibility towards society and the wider region as well as established the Slovene company SkyLabs by promoting entrepreneurship among the most successful students. Through successful support of entrepreneurship within the innovative ecosystem for knowledge transfer between the university and company we have created a symbiotic relationship between the two spheres that today supplement each other for common development objectives and a commercially viable sustainable development based on technological innovations, international promotion, research and education.

By creating new breakthrough technologies and technological development as well as maintaining knowledge in Slovenia, we ensure sustainable development from the perspective of science, education and economy. By establishing a research, development and educational environment in the field of space technologies, together with the Slovene economy, we address the upcoming changes in the utilisation of space and space technologies that will have a tremendous impact on society, environment and economy in the future. Space technologies create a new market of exceptional proportions that has clearly outlined ethics at the core of its business model and impact on business operations, environment and society and at the same time proves that there is no location monopoly on effective innovations.

and a brighter future!

Further development is mainly focused on new space technologies with a high level of miniaturisation and advanced space application that aim at the new space market by increasing intelligence of the ground and space segment to face the needs of future space missions. From the perspective of education, we will further promote space activity in the public and provide education of competitive engineers for the Slovene space industry. The path to space is no longer unfamiliar, unknown or impossible, it became part of our reality. In the second quarter of 2022, the new satellite TRISAT-R will travel to space on the VEGA-C launch vehicle. Its path to space leads to a much more demanding medium Earth orbit 6000 km away with the aim to carry out measurements of ionising radiation in the magnetosphere as a method of measuring space weather. Upon a successful mission, TRISAT-R will represent a new global milestone as the first nanosatellite in MEO. In the third quarter of 2022, the new satellite TRISAT-S will travel to space on the Spectrum launch vehicle. It will serve as the technological demonstration of the state-of-the-art machine-accelerated secure communication between the space and ground segment by using the SkyLabs broadband communication module, which currently provides the highest level of miniaturisation on a global scale. In this way we try to ensure further market competencies for new products developed by Slovene companies.

“For me, space is an unsolvable multitude of everything within which humanity was not intimidated by the unexplained. Technology accompanies us in the background, supports our lives, learning and thinking. Today, we install intelligence into devices and technology is slowly beginning to understand the rules of nature itself. In the era of modern information society, we are somehow trying to digitise all processes, among others also the basic methods of our interaction as the fundamental element of our society’s existence. Today, we are using the already completely standard process model for these actions and are thus moving away from the continuity of nature that within our understanding of today gets a touch of discretion only at the quantum level. Now is the time to rethink our role in space and expand our view on nature as well as to look deep into the future for our common better and more beautiful tomorrow.” doc. dr. IZTOK KRAMBERGER

As part of research and development activities in the group we have developed new key technologies for fault mitigation with the aim to ensure operation of electronic assemblies with a high level of miniaturisation and a high level of embedded intelligence in environments with an extremely increased level of ionising radiation. Today, key technologies, such as the fault tolerant PicoSkyFT process core and overflow protection of integrated circuits with a high level of integration, enable us to include them in various electronic subsystems for data handling on board of the satellite with the aim of ensuring a high degree of reliability and availability in the space environment. As part of the high level of integration and miniaturisation, the key technologies ensure us better intelligence of algorithms on board of the satellite and consequently an extremely increased situational awareness as well as increased process capacity which is crucial for future missions. We also began to transfer key technologies to the semiconductor level. By doing so, we will further increase the integration level of such systems. The development of high technologies is a key element, ensuring sustainable development and at the same time competitive advantage on an international scale. 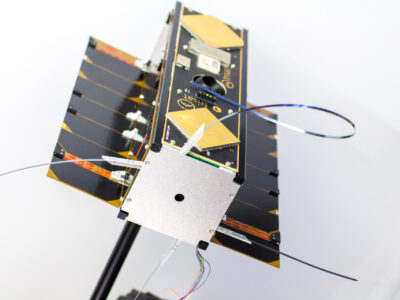 TRISAT is an institutional non-commercial nanosatellite mission that is primarily implemented by the University of Maribor together with the Slovene company SkyLabs under contract with the European Space Agency (ESA). It is a technological demonstration of Slovene space technologies in orbit by following the latest trends of technological miniaturisation and addressing upcoming changes in space economy. The scientific goal of the mission focuses on remote ground surface detection by using the miniature hyperspectral optical load that together with the high performance S-BAND communication ensures reasonably priced Earth observation within the short-wave infrared spectrum with up to 8 non-overlapping spectral bands. The TRISAT spacecraft is based on a high performance platform of the Slovene company SkyLabs. With a high level of miniaturisation it also ensures tolerance for faults and their mitigation, as can be expected in advanced high-end systems. From the perspective of education, the mission has already proven its role by providing valuable experience that are and will be very much needed by future generations of Slovene space engineers. 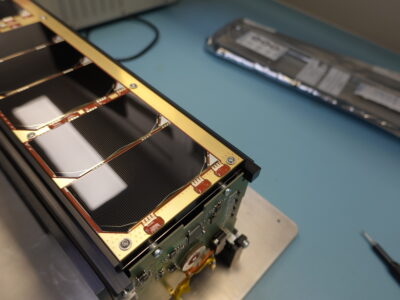 TRISAT-R is an institutional non-commercial nanosatellite mission that is primarily implemented by the University of Maribor in cooperation with CERN and the Slovene company SkyLabs under contract with the European Space Agency (ESA). The aim of the mission is to provide valuable measurements of ionising radiation from the medium Earth orbit at an altitude of approximately 6000 km. Measurements of ionising radiation including the total ionising dose and effects of individual radiation events are performed with various scientific instruments provided by CERN, ESA and SkyLabs. The obtained data provide sufficient information for space environment characterisation and will further serve the improvement of environmental models’ parameters for the characterisation of systems based on the effect of high-energy hadrons and spectrum hardness factor. Additional experiments on board the TRISAT-R developed by ESA and SkyLabs also demonstrate fault mitigation techniques based on adequate planning of the protection of high performance electronic components with high integration in radiation environment, focused on the upcoming era of artificial intelligence in space applications. 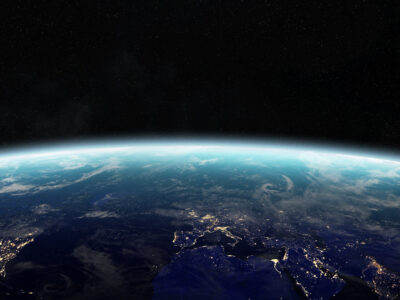 TRISAT-S is an institutional non-commercial nanosatellite mission that is primarily implemented by the University of Maribor in cooperation with the Slovene company SkyLabs. The primary objective of the TRISAT-S satellite mission is the technological demonstration of a secure radio connection between the space segment of nanosatellites and the ground station. The technological demonstration of the secure connection is based on the state-of-the-art version of the software defined broadband radio system that includes both the space as well as the ground segment and provides security of the entire communication between the satellite and the end user. The ground segment also offers a cloud interface for uniform integration of communication into state-of-the-art information systems.